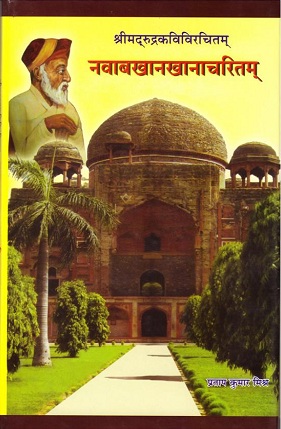 Nawab-Khankhana-Charitam is a historical work of Sanskrit Literature. The poem can be Categories as Champu-kavya in the types of Sanskrit poetical works. It was composed in 17th century by Sri-Rudra Kavi of South India at the instance of his patron, Maharaja Pratap Shah, the Rathour emperor of Bagulan (Nasik) in South India. As we know only two manuscripts of this work are available, first in India Office Library, London and second in Nagpur Vidyapeeth, Maharashtra. The critical edition of the text was published in 1959 A. D. by Professor J. B. Chaudhury but unfortunately the attention was not made over it. This edition, as well as Hindi translation follows Professor Chaudhuri's version.

The aim of this work is very important for historical relations between Mughals and Bagulan Rathaur kings. According to historical facts; except the first military expedition in 1596 to 1599, no attacks were made over Bagulan by Mughals in Akbar’s empire but when Jahangir reached the throne he assumed Bagulan to be a part of Mughal Empire. Thus Jahangir sent a great military expedition to Bagulan. While the Bagulan king Pratap Shah (Son of Narayan Shah who has a friendship with Akbar the great) was not capable to face this attack, he tried to compromise with Mughals but failed in all his attempts.

Auspiciously, Rahim was the Commander in chief of this military expedition whom Pratap Shah knew very well. Moreover, Pratap Shah knew about his Sanskrit knowledge, his devotion to Sanskrit Studies and as well as his love for Sanskrit poetry. Pratap Shah had also taken notice of the Sanskrit writings of Rahim. All these were fallen as an opportunity for Bagulan-king and he took an initiative to impress the royal person through his interest. As soon as, Pratap Shah ordered his court poet Sri Rudra Kavi to compose a poetical work to praise and make an impact on Rahim. Rudra Kavi, as he was ordered; finished the task and named his work ‘Nawab-Khan-Khana-Charitam’.

Pratap Shah undoubtedly was successful in his plan and got reinforcement from that very expedition because in the history of Mediaeval India, we find that this great military expedition was ordered to go back from Bagulan. It would be wonder to know our readers that the historical facts about diplomatic relations between Mughals and Bagulan and Jahangir’s attack over that country can be interpret in the contemporary Persian annals and modern historical books but there is not a single evidence to answer that how and why the expedition was taken back?......

Rahim’s devotion to Sanskrit, his love for Sanskrit poetry, Pratap Shah’s plan, Rudra-Kavi’s composition, the preparation of this Sanskrit work, its influence upon Rahim…… these are some evidences which are obviously absent in the modern books of History of India. In this regard the importance of this work and its publication with Hindi translation deserves no discussion in length.

Scholars' opinions/critics on the publication